Restricted to Base due to Covid-19

‘Bigger than a game’: US Military All-Stars come out to shine against Northwest Indiana Oilmen By DAVE MELTON. Tim Duncan, a lieutenant junior grade in the Coast Guard, said his childhood dream was to be a professional baseball player. But as he grew up, Duncan has learned to appreciate the game in every form.“It’s always been bigger than a game,” Duncan said. “Here, you get to experience that firsthand.” READ MORE

As the All*Stars Takes on the drive from Wa. State to the MidWest, major storms caused hundreds of miles of hotels to be booked. The buses and Heroes of the Diamond, pull into a shopping center parking lot to rest. Causing the team to have to drive less distance needed to NOT HAVE TO DRIVE so much the day of the first game in the MidWest. Not one Military man complains of the 8 hrs drive, now needed just to arrive on time for the scheduled game. Tank Stone says, “they will do their duty and shake it off to represent! Thank God this old man doesn’t have to swing with the All*Stars, I don’t think I can shake as I did as a younger man” as he laughed!!

Sweets down Military All-Stars, 9-3 The Walla Walla Sweets opened a six-game homestand at Borleske Stadium in fine fashion Thursday night with a 9-3, non-West Coast League victory over the Military All-Stars in a game much closer than the final tally suggests. READ MORE

Servicemen raise awareness through playing baseball | RIDGEFIELD — With their first game of the summer in a lightning delay, several players from the U.S. Military All-Star team stood in the outfield with members of the Showtime 18U baseball squad. They laughed, had some friendly competition and got to know one another as the rain drenched the Ridgefield Outdoor Recreation Complex. The game, which was part of the Hanson Cossman Tournament, was eventually cancelled. Still, there was valuable lessons to be learned. “I think we’re all still little kids at heart,” said Tim Duncan, a member of the U.S. Coast Guard out of Seattle. “When I was their age, it was all competition. … We’re out here spreading the love. At the end of the day, it’s a bigger picture than stepping on ballfields.” READ MORE 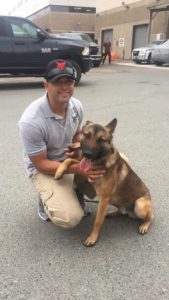 “Our own returning Navy Seal Daniel Vargas, was able to Fly in for the Tournament in the multiple stadiums we played in WA. Although his new partner Thor missed his Friend, Danny was only gone for one week. That’s all we could get him, but what a week for the 3 time returning All*Star!!  Navy Seal Daniel Vargas helped his team known as the Heroes of the Diamond, to come, to be seen and to take note of! Showing his pitching skills and determination to kick butt, with a smile. Cmdr Stone with his own smile said,” like a fine wine he gets better each year, but doesn’t age”.  LOL

Like the 30 plus players just this season, Danny will not be able to visit next season, our 30th Anniversary. He will be protecting our Freedoms, God speed my brother!  Stone says and adds, These brave warfighters coming in from the Battlefield to the Ballfield, “ It’s more than Just Baseball”. They Honor all Veterans along the tour route, they Honor the Fallen & Gold Star Families, but yet find the time to play America’s favorite pastime Baseball and pretty darn good too. They held a kids clinic today & last week worked and played with the Handicapped kids from the Miracle League of WA.

Does it give you a chill, a sense of comfort, that a young man like that is who is now returning “ From the Ballfield to the Battlefield “ to protect your family’s freedom? Well it does MINE! Now imagine all of these Heroes, all of each of the 5 Branches of service they represent and all of their hometown folks & families supporting them, feel the warmth, the comfort? We Stand for our Flag, our Heroes and our Country. God bless our 2019 team & God Bless the USA. Be safe Danny & Thor too!!

Military All-Stars: Armed forces join forces to form baseball squad! Now in its 30th season, the 2019 U.S. Military All-Stars begin their tour in Clark County this week They arrived in the region last week, most meeting each other for the first time. They practiced at the University of Portland, training for a tour of Washington and then the Midwest. They have yet to play a game but in so many ways beyond the sport, this just might be the finest baseball team ever assembled. Talk about your Dream Teams. READ MORE

HAPPY 40TH Anniversary to Tank and his wife MJ.

We have a new national sponsor, let’s give a warm welcome to our official naming rights sponsor this year, State Farm Insurance. “Like a good neighbor State Farm is there”. We are so glad that they are there for the All-Stars this year. Our Tour in our 29th Season will be called the State Farm “Red, White, and Blue” Tour featuring the U.S. Military All-Stars.

The All*Stars are proud to be working with top Commands in Recruiting, for all Branches across the country. Our “Red, White & Blue Tour” covers over 22 states over the next few years and can make hundreds of recruits real happy to be sworn in during the All*Stars special Pre-Game Ceremonies, in front of thousands of cheering fans.

With as many top players in the service swinging with the All*Stars this season, we want to thank all of the Scouts coming from around the Country to see these, “Heroes of the Diamond”. It makes many proud that these young men who put their own Baseball careers on the back burner to put Duty and service to Country first. Here’s to all of you that your Dreams of playing with the Pros may still come true! God bless your sacrifices & bless your Dreams!

Coach and GM reaching out to Discharged Marine at Columbia University in NY who’s breaking records in HR and RBI’s for a couple of years. Joey Falcone, you should check out his you tube video. The All*Stars are on the hunt, who wants to assist the All*Stars in getting the word out to one of the next “Heroes of the Diamond”?

From June 18, 2019 through July 10, 2019 the U.S. Military All-Stars will be staying at the University of Portland Dorms. They are available when the students are on break. GREAT TIMING for us while staying in the same area due to Tournaments and many local games.

So many behind the scenes accomplishments from our administrative department have already been made for this season. We are proud to announce our new coaching staff for our 29th Annual “Red, White & Blue Tour”.

Randy Myers – 1985 thru 1998, Left handed pitcher to assist our Pitching players.
Tom Michael Lampkin – 1988- 2002, Catcher to teach our catchers from several Branches this year.
Brian Lee Hunter – Former Center Fielder known for his 1997, streak of 70 Bases stolen!
Scouts will be at multiple events this season starting with; Our training week. Shawn Whalen, Scout for the Milwaukee Brewers checking talent levels out of our own, Heroes of the Diamond.

Due to data loss, we have no historical information accept for photos and videos