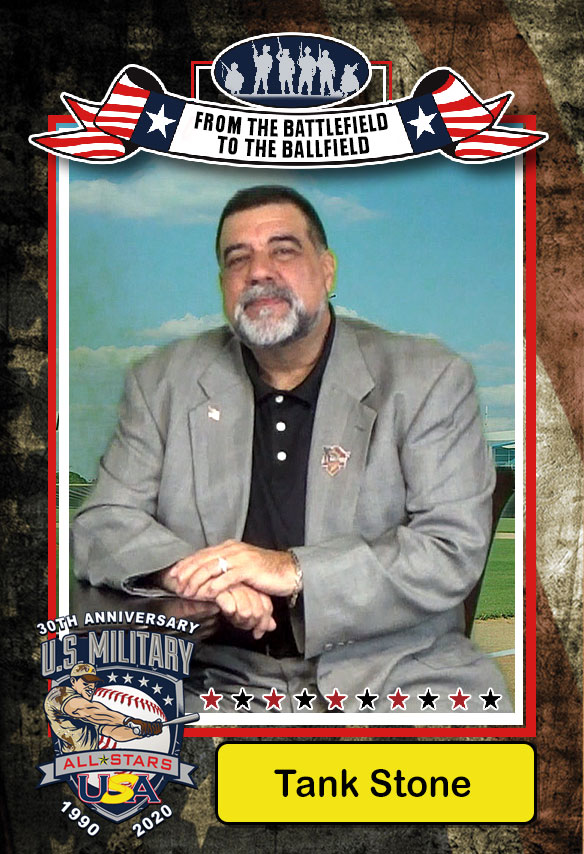 Tank played many sports in High School. He attended schools in New England, where he was born and raised until moving to CA. Although Baseball has always been a passion, while Pitching in Agawam MA. He also was Throwing a Shot Put in North Brookefield Ma. Which Gave notice to the Guns Tank still has. Basketball and Wrestling, Rounded his many Sports played in different Seasons.

Tank Joined the Navy right out of School And was Stationed on the John Paul Jones, DDG-32. As a Radar-man, when in Port, Radar was not operating, so he Pursued Writing the Ships Newsletter and assigning Break away songs for refueling exercises. Giving him a taste for Announcing and Music. 35 Yrs. later after a time on the Radio, announcing, Voice overs and Morning Shows, now Announcing for the All*Stars and conducting the Honor Ceremonies for all Veterans who have ever worn a Uniform in Defense of our Freedom. Tank has found a Home with the All*Stars since 2011.

In 2012, the Founder, LCMDR Terry Allvord, retired and Passed the Team to Army Ranger, Purple Heart Recipient,  Karl “The Hammer” Seiter and Tank. In 2015 Karl Moved on, but still communicates his years of experience with Tank.

Tank Stone, now V.P. of Development, with a 501c3 Board of Directors driven Franchise, is back to scheduling early Spring Games with the Pro’s and Div 2 Colleges. He is staying the Course with the Quarter of a Century Old Summer Collegiate, Barnstorming Joint Armed Forces Team, conducting the ” Red, White & Blue Tour across the USA. It is the most important Job I have ever had, Tank Stated! Raising Awareness and Funds to Honor our Heroes on the Diamond & all Heroes in all of the Military.